Supernova Cassiopeia A: the first stunning image taken by the #IXPE telescope 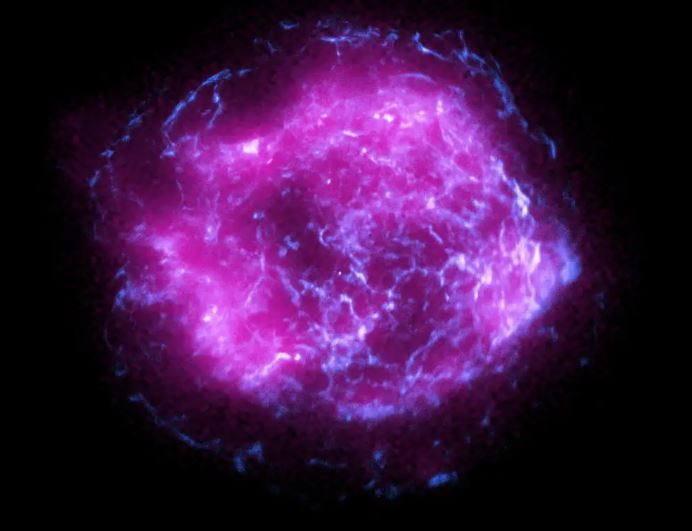 IXPE – Imaging X-Ray Polarimetry Explorer – focused its “eye” on #Cassiopeia A, an old supernova located 11,000 light years from the Earth exploded in the 17th century.
The telescope, a NASA/ASI mission launched on 9th December 2021, has started producing amazing results through measurement and polarisation of X-rays.

All electromagnetic waves – from radio waves to gamma rays, including visible light – can be polarised, i.e. they can oscillate along a specific plane as they propagate. IXPE’s sensors are designed to measure with great accuracy the polarisation of #Xrays, which are much more energetic than light radiation and invisible to the human eye.
Surprisingly the IXPE observations show that the magnetic fields associated with X-rays produced near the impact fronts, tend to maintain a radial arrangement, with a degree of polarisation comparable to radio observations. For scientists, this property is related to the fact that X-rays are also produced in very turbulent regions, where magnetic fields are strongly mixed,

#OHBItalia, as unique industrial partner, developed fundamental parts of the satellite: the Detector Unit Electronics (BEE), the Filter and Calibration Wheel Mechanism and the Detector Service Unit (DSU) which controls the Detector Units and provides a variety of functions as thermal control of detector, collecting scientific data and also interfaces to the rest of the spacecraft.

In the #image shock waves from the explosion swept through the surrounding gas, heating it to high temperatures and accelerating cosmic ray particles to create a cloud glowing with X-ray light. (Image Credits – X-ray Chandra: NASA/CXC/SAO; IXPE: NASA/MSFC/J. Vink et al.; Optical: NASA/STScI). The saturation of the magenta colour corresponds to the intensity of the X-ray light observed by IXPE. Overlaid with high-energy X-ray data, shown in blue, is from NASA’s Chandra X-Ray Observatory and the gold is courtesy of the Hubble Telescope.
www.ohb-italia.it

Your ticket for the: Supernova Cassiopeia A: the first stunning image taken by the #IXPE telescope

Supernova Cassiopeia A: the first stunning image taken by the #IXPE telescope